Prophecy of the Sisters by Michelle Zink

Lia and Alice Milthorpe are sixteen-year-old twins whose father has just passed away, leaving them and their brother Henry orphaned. The two girls though couldn’t be more different. Lia is quite a bit more social and kinder, while Alice keeps to herself and is very mysterious. What the two girls don’t realize though, is that they do have something in common. They are both part of an ancient prophecy that has turned generations of sisters against each other.
Just days after her father’s death Lia finds an odd mark start to appear on her wrist. Keeping her new discovery from everyone, including her beloved James and Alice, she sets off to find the meaning of it. She quickly comes to learn about the prophecy and her role in it. She hopes with her new knowledge she will be able to come to understand the mystery behind her parent’s deaths, the lengths her sister will go to destroy her, and the havoc that the downfall of the prophecy could bring.
Michelle Zink has created a stunning debut novel with PROPHECY OF THE SISTERS that I thoroughly enjoyed. She had great characterization and a spell-binding plot that literally glued the book to my hands!
One highlight of the book for me was the setting. I loved the magic that surrounded Birchwood (the Milthorpe estate) and the town, as it really added to the mystery of the story. At many times I was reminded of Libba Bray’s Gema Doyle series, but this book is definitely its own story.
As for the plot, it was absolutely riveting. With the different worlds and the secrecy of the prophecy, I was completely transported into Lia’s life. The battle between the sisters was interesting and a concept that doesn’t seem to be too prominent in YA fiction. It added a whole new element of secrecy to the book, leaving the reader anxious and hesitant as to what was going to happen next.
I also loved the characterization. It was so easy to see the difference between the two characters and I never felt like they blended together. The writing was also fabulous, drawing me in at all times.
Overall, I thought this was a great debut and a fantastic start to a series. I cannot wait to read more about these sisters and learn more about their fates. Definitely pick this book up if you’re looking for a stupendously haunting novel that won’t disappoint!
Posted by Tasha at 7:37 PM 2 comments:

The Miles Between by Mary E. Pearson 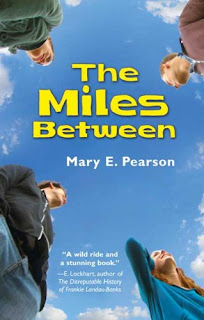 Destiny Faraday has made it her duty to keep a distance from anyone and everyone at school, as the reality is her parents will move her soon enough. She’s been at Hedgebrook Academy now for almost two years and everything has fallen into a routine, careful that it doesn’t include much time to really get to know people.
With one turn of the calendar page though, Destiny’s careful routine is thrown to shambles. First her Aunt Eddie can’t come to visit her and secondly she runs into a very mysterious stranger, a stranger who just happens to leave his car running in the school parking lot. Looking for just a day out Destiny hopes in said car, along with three classmates, and embarks on an unauthorized road trip to a location only Destiny knows the true meaning of. All have hopes to make this day a fair day – a day where the good guys win and everything is just so right.
This book was, hands down, one of the most original stories I have ever read. There were so many twists and turns that it kept me on my toes and wanting more with every period. I loved the unique characters and their complexity along with the breathtaking writing that truly transported me to the car along with the students.
Destiny’s character absolutely blew me away. She was so alive and heartbroken that I couldn’t help but connect with her. I enjoyed seeing her layers peel back as the story continued and loved the mystery of getting to know her. All the other characters were well developed and I desperately wanted them all to be my friends, so that I could participate in their crazy adventures. It was also really neat to see the relationships that the characters formed unravel.
As I mentioned before the writing was spectacular. Everything was so real, the wind, the trees, and the emotion. It was definitely one of the few books that really took over my imagination and transported me into their car. The ending was also superb. It was unexpected and left me wanting so much more, but tied everything that had occurred in the book together.
I highly recommend this book to any reader looking for a very powerful, real and emotional read. It was one of the best books I have read in a long time and will give any reader chills. It really showed the true power of friendship and the magic of chance.
Posted by Tasha at 5:02 PM 4 comments: