Yes, author visits have been a little lacking, as school has majorly interuppted by blogging/reviewing/*gasp* reading life, but fear not as I have a great author visiting us today!

Jeanne DuPrau is the amazing creator City of Ember series. Not only are the books bestsellers, but City of Ember has been made into a movie which is set to come out on October 10th. So read on for a fun filled interview. Hope you enjoy it as much as I did!! 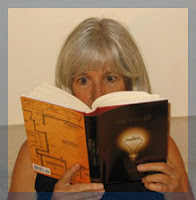 I grew up in the 1950s, when many people were worried that there might be a nuclear war. Some of them were building bomb shelters in their back yards. I think this influenced my idea for Ember—a city built to protect the human race from a terrible threat. But I was also just interested in the idea of a city that had no light other than electricity. What would it be like to live in such darkness, and to know that light and food and supplies were all running out? And not to know about weather or trees or animals (except for a few rats and insects) or any other places? All this grabbed my imagination. And once I'd written The City of Ember, I hoped it would make people think about our world—about the sun and the moon, the forests and the ocean, the wind and the rain—and how precious it all is.

Yes, both Doon and Lina are like me in some ways. Lina likes to draw and to use her imagination and to go fast, Doon likes to solve puzzles and he’s interested in bugs and in nature in general. All those things are true of me. Doon and Lina are much braver than I am, though.

Of course! It’s absolutely amazing. It does mean that I have to have the same conversation over and over: Person: “Your book is being made into a movie? Wow, that must be exciting!” Me: “Yes, it’s really exciting!” But I’m not complaining.

No, none at all. But I’m really glad Bill Murray is playing the mayor, and Saoirse Ronan I think will be perfect as Lina.

No, I had no plans for anything beyond the first book. When The City of Ember was a success, my editor suggested a sequel might be a good idea. I had to admit I was a bit curious about what would happen to Lina and Doon, so I wrote The People of Sparks. Then a very different idea occurred to me—at first I thought it wasn’t connected to the Ember books, but soon I realized it was. That was The Prophet of Yonwood. And finally, I wanted to bring the story back around to its beginning and tell how the threads of all the books came together. That’s what I’

ve done in The Diamond of Darkhold.

Far back in the mists of time. Actually I don’t think there was ever a moment when I thought, “I want to be a writer.” Writing was what I was best at. I worked hard at it, I wrote many different things, I sent them out, they got published—and voila! I was a writer.

I’ve been taking a break since The Diamond of Darkhold, but a few ideas are beginning to swirl slowly around in my mind.

No, the Ember series has come to an end, although there might—just possibly—be another Ember-related item to come. It’s too early to speak about that one, though.

ot. Write a lot. Write all kinds of different things. Be interested in people and in the world around you. Learn the essentials of writing—grammar, spelling, punctuation, sentence structure, how to organize thoughts. Write because you have a terrific story to tell, or a vital idea to explain, or fascinating information to put forth.

How could you not ask about my dog?! He’s a Cairn terrier, and his name is Ethan. He helps with my writing by sleeping peacefully most of the day.

Still haven't had enough of the fabulous Jeanne DuPrau? Well here are a bunch of links with information about her and her books. Also there are links to the fellow bloggers who are also participating in her tour.

Thanks for visiting Jeanne DuPrau!
I've read the first book and I am working on the second book in between other reads.

I'm looking forward to the movie!

I am so happy to learn of this series and the upcoming movie — and through you. How are you? How is this year of academics going?

You are very kind about the GHOSTS cover. I thank you.

What an awesome author visit - I read The City of Ember when it first came out and loved it. And now Bill Murray is in the movie - crazy!