Well I'm sure you've all heard about her, but now it's my turn to host the lovely Jennifer Banash. Jennifer's first YA book, The Elite, came out at the beginning of June. For my review click here. It's a great book and Jennifer is an even greater person to talk to!! I hope you all enjoy our interview in which she even gives us a sneak peak into one of her current works that is just a tad bit different than what we're used to seeing with The Elite. 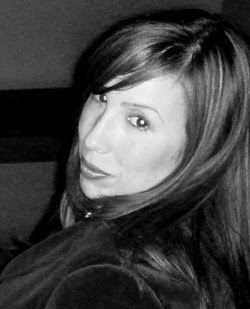 What sparked the creation of the The Elite?

I went to high school on the Upper East Side, and I always wanted to write about that world—but from an outsider’s perspective, which is how I first came up with the character of Casey McCloy, who moves to Manhattan from Normal, Illinois, and really struggles to fit in. I always felt like an outsider in that world, so I wanted to bring that perspective to the series.

I’m probably a bit of both! People probably view me as a because of the way I dress, while, in actuality, my personality is definitely more like Casey’s! Put it this way: on a good day, I’m Casey. On a BAD day, I’m —but then again, I think we’re all prone to playing the diva bitch when things aren’t exactly going our way . . .

Will the series continue? If so, how many books are you planning?

Right now I’ve been asked to write three books in THE ELITE series—whether or not it continues depends on readers like you! I, for one, would love the series to continue. So, if you enjoy the books, let either me, or Berkley Jam know so that I can writ 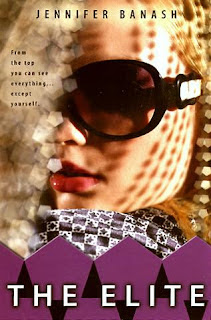 What was your favorite part about writing The Elite?

My favorite part of writing the series is getting to go back to my hometown every day—even if it’s only in my mind. I get very homesick sometimes, and being able to live a fantasy life in , a town I love deeply, is very comforting to me. It’s also hugely entertaining to step into the shoes of Sophie, Casey, Phoebe, Mad, and Drew for a day—they live such fabulous lives!

What events in your life have shaped your writing?

My father left my mother and I when I was just a baby—he came back to visit me for my second birthday, and it was the last time I saw him before he literally disappeared—he was on a flight that was lost in the mountains and was never found or recovered. In any case, when he visited me on that birthday, he brought me a typewriter—not a kid’s Fischer Price toy, but a real typewriter. I always wonder if that gift, at least subliminally, influenced my decision to become a writer. I think, in some small way, it must’ve. He stayed missing, was finally declared dead seven years later, and I never saw him again.

I will probably always write about things that are fairly escapist and glamorous—simply because those are the kinds of book I love to disappear into as a reader. My next series is a revision of DRACULA, entitled BITTEN. The plot revolves around two socialites who just happen to be identical twins, and whose parent’s, in the midst of a mid-life crisis, end up buying Dracula’s castle in and moving the family there. To wet your appetite, here’s a little teaser:

Mina Vanderbilt has just moved with her family to a dilapidated, musty, stone castle in that once belonged to Dracula himself. Her parents, successful Manhattan real estate moguls, are clearly in the throes of a major midlife crisis, and, as a result, have decided to “rearrange their priorities” by selling the Vanderbilt’s fabulous penthouse apartment, and moving Mina and her identical twin sister Lucy to Eastern Europe after bidding an astounding $137.5 million dollars at ultra-exclusive auction at Sothebys. But before both girls begin attendance at a posh boarding school in Geneva, Switzerland, they’ll spend the summer at their new home sweet home—a castle situated in the heart of Romania, just off of Highway 73—better known as the intersection of creepy and get-me-the-hell-out-of-here—worlds away from their sophisticated Manhattan lifestyle where they’re used to getting whatever they want, whenever they want. With Prada bags slug firmly over their shoulders, they’ll learn to navigate the endless corridors and wings of the drafty pile of bricks (OK, their mother, Amanda, began a massive redecorating and demolition project immediately on their arrival, but come ON—there are SKULLS in the cellar for God’s sake!) which may or not be haunted by the spirit of a certain cape-wearing, blood-sucking legend . . .

Upon their arrival, Mina quickly falls in with Jonathan Marlowe—the town’s resident hottie, who’s left to visit his grandfather for the summer and spends his days attempting to pen the next great British novel at the towns lone café. But after Mina suffers a “bite” from a mysterious apparition one evening while trolling the grounds of the castle, her love life will never be the same again. Expressions like “can I have a bite of that?” take on a WHOLE new meaning, and suddenly, the most notorious identical, inseparable twins in all of have never been quite so different . . . 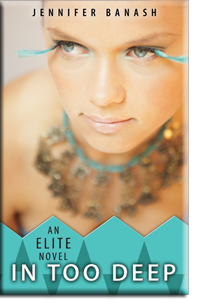 What’s the best part about being a writer? The worst?

The best part about being a writer is getting to talk to readers, hearing what they liked and disliked about my work is the joy of this whole experience for me as an author. The hardest part about writing is deadlines—having to work on a novel, regardless of whether or not you FEEL like it, or are burnt-out, can be really tough. I wrote all three ELITE books in one year while I was finishing my PhD in English, and that was really exhausting!

My kitchen table—or the local café—which is the best, and often worst location as I tend to eat many, many more chocolate-chip muffins than I should . . . They don’t have any calories anyway, right?

What’s one quirky fact about yourself that you want to share?

My friends and I all call each other tranny hookers on a regular basis. Like, I’ll pick up the phone and hear “What’s up, tranny?” or some variation on that theme. Don’t ask—we have no IDEA where it came from, but I suspect Christian Siriano on Project Runway may in fact be the culprit . . . :)

The Elite was excellent. And Jennifer is so nice. :)

Great interview. I can't wait to read Bitten and In Too Deep!

My lovely sister read "The Elite". She enjoyed it too! Thanks for the interview.

I'm going to start saying Tranny a lot... It's totally a CS thing.