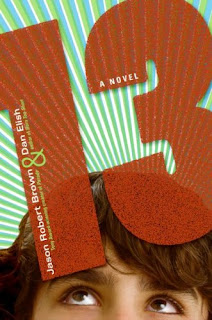 In three months Evan will be 13. He is already planning his Bar Mitzvah when he learns his mom and dad are splitting up and he’s moving to middle of nowhere Appleton, Indiana. On top of leaving NYC and his friends, Evan now has to plan his Bar Mitzvah in Indiana. He knows no one will show up and is horrified to know that it will take place in the basement of the Methodist Church. Even though Evan expects his life to be miserable he soon befriends Patrice, a pretty girl who loves old movies and is a little bit of a geek. Evan never has a problem with her until he becomes friends with Bret. Bret is an all American boy. He’s the junior high’s quarterback and is loved by all the girls and parents, for that matter. As Evan becomes more involved with Brett and his gang of friends he starts to lose sight of how friends are supposed to treat each other. As the weeks go by Evan gets tangled up with planning his “becoming a man” speech, more drama than he can handle, and a particularly weird situation which includes the movie The Bloodmaster. Evan soon learns that being a man isn’t all it’s cracked up to be and ends up learning more about himself then he ever thought possible.

I was quite pleased with this book. I don’t always enjoy middle grade fiction because I find it hard to relate to, but I can vividly remember being 13. The author made an unforgettable character out of Evan that made me laugh out loud and reminisce about days when I was his age. I remember going through similar situations as Evan did and handling them just about as well as Evan did! This book also made me laugh. Just the style of writing and the words that came out of the character’s mouths were funny. While middle grade novels may not be your first choice, I highly suggest you pick this one up and laugh along with the story. This book would also be good for reluctant readers. It’s not particularly long, yet it is long enough to be a wholesome story. The message of self discovery and being your own kind of person is also a great part of this book. 13 was an enjoyable read that will keep readers wanting more.

I think highly of the musical The Last Five Years by Jason Robert Brown. I have not yet had the chance to see nor hear his musical 13, so I'm curious about this novelization.

I'm not at all interested in this book. Partially because I hate the cover. And because it says 'a novel' really obviously. Larger than the author's name.