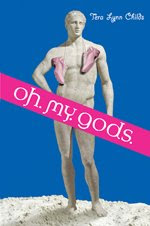 Phoebe is a cross-country star. If she can just keep her grades up and keep up her awesome winning streak, she has a guaranteed scholarship to USC. In fact her two best friends, Nola and Cesca, are planning on going there too. Everything is great for Phoebe until her mom returns from a family reunion with a fiancé, Damian. Phoebe can’t believe that after four years of mourning the death of her father, her mom is engaged to a man she has known for less than a week. Phoebe doesn’t think her life could get any worse, but then her mother announces that they’re moving to Greece because of Damian’s job. Much to her discontent, Phoebe packs a meager three boxes and heads halfway across the world to a new life. This new life includes a new school located on a secret island and a school where the students are anything but normal-they’re descendants of the Greek gods! Phoebe seems to be in over her head, but with the aid of some new friends and a gorgeous model-worthy guy, Phoebe learns that she can fit in just about anywhere - even if her new step-sister is a descendant of Hades.

First, I must say that I love Greek mythology and had really high expectations for this book. Wow! This book surpassed all expectations and was just great. The story line was completely original and I loved all of the references to the Greek gods. It was really neat how the author made all the characters have the traits of the gods and goddesses, but also be your everyday teenager. Phoebe’s character was also great. She was funny, sweet and very likeable. Many times throughout the story I found myself cheering her on against all the obstacles that she encountered. I would definitely recommend this book to anyone. It has every element you might be looking for in a book, romance, suspense, and an amazing storyline. All in all this was a great book that took high school life and mixed it with a little bit of mythology. I very much look forward to what Tera Lynn Childs has in store for us next!
Posted by Tasha at 4:47 PM

I'm so jealous that you have a copy of this book! It looks amazingly good and I can't wait until it comes out. Nice review!

i know!! i want this book very badly.

i finished this one last night! isn't it awesome!

oh i'm jealous too. I love anything to do with greek mythology

Great review. I finally got my copy from Amazon, and couldn't agree more. I'm a couple chapters in and can say it definitely does not disappoint. Great characters, amazing details, fabulous concept and makes learning Greek mythology even more fun than it was the first time around. Could. Not. Love. It. More. XO