Change of Heart by Jodi Picoult 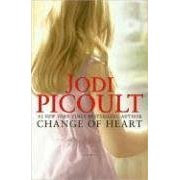 June Nealon leads a happy life. She’s married to a man who loves her and her daughter and she even has another daughter on the way. Little does she know the day she invites the handy-man going door-to-door looking for work will be the day her life changes. The handy-man’s name is Shay Bourne. Days before the project is complete he is found with a gun in his hand surrounded by the bodies of Kurt and Elizabeth Nealon, June’s family. This is the most heinous crime that the state of New Hampshire has ever seen and the jurors, even the young college student originally against the death penalty, sentence Shay to death.

Now eleven years later June is still recovering from her loss, but luckily still has Claire - the baby who kept her living while all she felt like doing was dying. The thing is Claire is now dying. She needs a heart replacement, but one doesn’t come across a heart for a child’s body everyday. Then there is Shay who still hasn’t been executed, although his execution date is drawing nearer everyday.
Shay knows he’s going to die and is surprisingly okay with it. The only thing he wants when he dies is for his organs to be donated. He especially wants to donate his heart to one girl in particular, Claire Nealon. The only catch is that because lethal injection is used to kill him he won’t be able to donate any of his organs. Then Father Michael enters Shay’s life and finds ways, including an amazing lawyer, to help Shay make his last dying wish come true.

Wow was this ever a thought provoking book! It was quite remarkable. This is the first Jodi Picoult book that I’ve read, but I can definitely tell you it won’t be the last. First of all, the story it self was wonderful. There were so many twists and turns that I was never able to figure out quite what was going to happen next. By the end of the book all these pieces came together, like a puzzle, that made everything you ever questioned in the book make sense. The characters were so real and I felt like I really knew them. I also felt as if I was actually sitting in the courtroom where Shay’s trial was taking place, or walking the corridors of the hospital with June. I love when a book makes you feel like that. Jodi Picoult style of writing was also really impressive. She told the story through different character’s perspectives which I really thought was beneficial. This way the reader was able to really comprehend the situation as well as learn how it was affecting each character. This really helped to develop the character and made the book that much more enjoyable. Then comes my favorite part of the whole book, the questions it raises. Not only were the characters questioning some of the points that were made, but I was too. Issues about religion and the death penalty, which can be so controversial, were expressed through this novel in such clarity that my mind was racing during the whole book. This was a fabulous book that I highly recommend. Even if you’ve never picked up a Jodi Picoult book you should definitely try it.
Posted by Tasha at 8:52 PM

Thanks for the comment on my review for The Running Man. It was really good :] I'll add your blog on my side links if you want :]]

I think I would have enjoyed this one if it wasn't my first Picoult book I've read. I just discovered Picoult this year and this was my third one. So far, she seems to use the same formulaic writing, but as her books are on the New York Times bestseller lists, it must work.

i love picoult! i will have to add this to my reading pile, great review!

I looooover Jodie Picoult's books. I haven't read this one yet but hopefully I will soon.