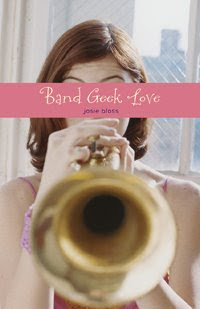 Ellie is your ultimate band geek. She spends hours of her time practicing and he ultimate high school dream is to become the trumpet section leader. Now it’s Ellie’s senior year and she knows it will be her best. She is the trumpet section leader and even has a killer solo that begins the whole show. Hopefully she will even be able to finally forget about the traumatic crush she had her freshman year. Yes, that’s right, Ellie hasn’t been able to trust or like anyone since 9th grade when her crush on the current section leader got announced.

When the last day of band camp arrives Ellie is anxious to debut her solo. She’s been anticipating this moment for forever and knows that it will rock. That is until her eyes fall on a particular boy in the audience. One she’s never me before but who’s looking at her as is he’s known her his entire life. After that look Ellie is doomed. She proceeds to flub her first note and make mistake after mistake throughout her solo. Little does she know that this won’t be the last time she sees this guy and he will end up messing up more than just her solo. Is it possible tough that the will change Ellie for the better, or will she just retreat more into herself?

This is definitely a fun, light summer read. It has just the right amount of sass, humor and romance to peak anyone’s interest. Overall it was a good read with cute characters and a good plot. But I felt that the story was too rushed. It zoomed from one dilemma to the next without much reasoning. I also felt the book was very predictable and didn’t really keep me guessing. What I did really enjoy was Ellie’s character. She had a great (and very funny) attitude that kept me laughing throughout the book. I only wish she had spent more time making wise remarks and dealing with her feelings, than holding them up inside her an moping about them. While there was one unexpected twist there wasn’t much else there that I hadn’t read before. Despite these things I think that band geeks as well as non band geeks will find an entertaining read in Josie Bloss’ debut novel.
Posted by Tasha at 7:00 AM

Heh. I just got a fifty dollar gift certificate for Chapters (sort of the Canadian Borders...), but I don't think I'll spend it on this one. Your review was great, but I have to many tramatizing clarinet moments. :)

Great review! This sounds like my kind of book, so this is going on my TBR pile. Thanks for sharing! =D

I wanted to read this book but now I'm not so sure. I'll try to see if my library has it. Good review! :)

aww, this sounds so cute!! i should definitely check it out (not that i'm a bando...)

I really want to read this book. I had some copies coming for review and for my anniversary giveaway last month, but they somehow got lost in the mail, which sucked. I'll definitely have to check my bookstore or library for it. Great review!