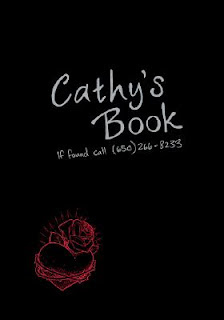 Lately things haven’t been good for Cathy. Her father died, her boyfriend dumped her, and her grades aren’t so hot. While she can’t do anything about her dad and doesn’t really want to do anything about her grades, she is determined to figure out why her boyfriend dumped her and why in the world she has a needle mark on the inside of her arm when she comes home from his house. From the moment she decides to search out Victor and learn his secrets, she is swept up into a mystery involving some shady characters and business. Not only does Cathy have to deal with this weirded out mystery she’s gotten herself into, but there’s her moody mom and her best friend who’s having some problems of her own. In her journal Cathy retells her hilarious tales and takes a twisting journey to solve the mystery that every girl wants to know. Why did my boyfriend breakup with me?

Well I liked this book, but there were definitely some things that prevented it from being a great book. For me this book started off really slowly and I felt a little confused. As the book progressed it started moving at a lot faster pace and became quite enjoyable. Sometimes the book would switch to the past without a lot of notice and it would get confusing because you would be wondering what this had to do with the story line. Other than those couple of things, I enjoyed the book. Cathy has the ultimate sarcastic and funny attitude that I always appreciate in a book and her ideas are off the wall funny. Then there is the whole mystery. It is seriously the most unexpected thing. I mean nothing foreshadows what is about to happen and it would have taken me millions of years to guess! I can’t give away the surprise, but it was so crazy that I liked it. I also thought it was neat that the book is “interactive.” There is a pocket of evidence enclosed with the book which is the actual things that Cathy finds along her quest. Also there are a bunch of phones numbers and websites that provide other clues to the mystery. I think this is definitely a great book for reluctant readers as it’s short and easy to participate with, making reading fun. I am most certainly looking forward to reading the sequel Cathy’s Key. 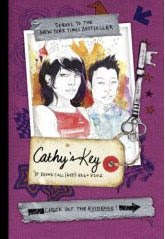 Cathy is back and she is as curious as ever! It's been six months since Cathy's seen her boyfriend Victor and she is completely clueless as to where their relationship stands. Out of desperation she sets off to in order to meet the fortune teller whose name was sent to her months earlier in a mysterious package. After her meeting with the mysterious Auntie Joe, who claims that Cathy's father didn't really die of a heart attack but that he was murdered, Cathy is as confused as ever. On her way home Cathy meets Jewel. Jewel immediately gets on Cathy's bad side when she tries to weasel money out of her. She's even bold enough to take Cathy's diary pages (recounting her last adventure) while Cathy is out buying food. Despite a bitter start, Jewel and Cathy become pseudo friends and spend the long, boring bus ride home talking. That is until Jewel disappears with Cathy's cell phone and diary pages, virtually stealing her identity. This is really the least of Cathy's problems because when she returns to she is determined to find out what really happened to her father and also squeeze in time to find a new job. With the help of her best friend Emma, Cathy embarks on an adventure to find out more about her father and she will learn more than she could have ever fathomed!!

This book was undeniably better than the first. It didn't take me any time to get swept up into Cathy's hilarious adventures and mishaps. Cathy became very real in this book and her personality was absolutely brilliant. Her attitude was hands down one of the funniest I've ever come across in a book and I found myself howling aloud in amusement from the words that came out of her mouth. I also felt like the author was really able to pull off the plot in this sequel. In the first book it was a little questionable, but this time it really made the book shine. What's also great about this book is that it's really not necessary to read it's precedent, Cathy's Book, as it completely holds its own and won't confuse the reader. Overall I was highly impressed with this book and was completely shocked into loving it. It is a great summer read, not too long, but long enough to have substance, and I whole heartily recommend it to all!!

I really want to read these books. Great review! :)

I have been wanting to read this book for a long time, but haven't been able to locate it anywhere near where I live!

I went to Hastings yesterday and saw both books there. I wanted to get them but they are so expensive! :(

I also really wish they weren't ridiculously expensive. They sound great, so hopefully there will be cheaper versions soon? Thanks for the review!