The Chicken Dance by Jacques Couvillon 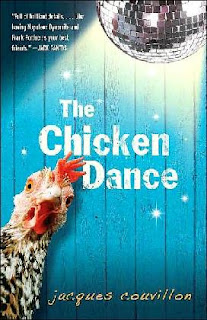 Don Schmidt lives on a chicken farm in Horse Island, Louisiana. He is unpopular at school (he has absolutely no friends and everyone refers to him as "new kid," even though he has lived on Horse Island since kindergarten) and at home (where his mother constantly refers to his dead sister Dawn, and thinks the world revolves around herself). Out of loneliness he befriends the chickens living in his backyard and they become his best friends. Don's luck soon changes when he becomes the youngest person ever to win the chicken-judging contest at the local dairy fair. Everyone wants to be his friend and his mother seems to care about him a little more, but not enough to stop ordering him around. Don is content with his life until he finds a metal box with a birth certificate in it. The birth certificate belongs to a boy named Stanley. Don wonders who Stanley could be and when he asks his father who he is his Father simply tells him that it is his birth certificate and that they changed his name to Don, because the uncle who he was named after was a bad man. Don doesn't believe his father and begins to believe that Stanley is actually his twin that got kidnapped when they were younger. Stanley isn't real, but Don believes he is and talks to him like he was a normal person. Don soon learns that the hidden birth certificate isn't the only secret his parents have been keeping from him. Once he learns one secret he is hungry for more, and then they all unravel into a shocking, unforeseeable truth.
For the most part I enjoyed the book. It was full of unexpected twists and turns and made me laugh. There were parts of the book though that made me very mad. Especially when Don's mother forgot Don's birthday - twice, and when she wouldn't even congratulate him on his winning the chicken-judging contest. I would get very frustrated with the book and put it down and walk away at these points, because I feel that no mother should ever forget a child's birthday and should never treat their child the way his mother treated him. Besides this, the book was suspenseful and ends with a bang you would never see coming. Jacques Couvillon created a good first novel and I look forward to reading what he has coming next!
Posted by Tasha at 12:30 PM

I hadn't heard of this one - thanks for the review, it sounds very cool. I'll add it to my list.

rachel of A Gaggle of Book Reviews

Thanks for the positive review. This one didn't quite work for me, but was interesting.