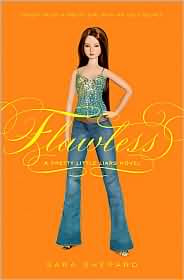 Flawless is the second book in the Pretty Little Liars series. It starts out right where Pretty Little Liars left off, except for a preface that includes a couple juicy secrets! Note: Don't read if you have not read Pretty Little Liars, unless of course you don't mind spoiling a little bit of the book!
Rosewood, Pennsylvania is mourning the loss of Ali DiLaurentis after her body was recovered in her old backyard. Spencer, Aria, Hanna, and Emily all meet up at the memorial for Ali and discover that all four of them have been receiving messages from A. No one knows who A is and they are desperate to find out. At the memorial service they are all shocked to see Toby the brother of Jenna, the girl who had the terrible accident. They all wonder what he could be doing back in town, and could he be A? As for the rest of the girls lives they are as scandalous as ever. For Spencer she's starting to slip from the stress of life. Her parents are still unbelievably mad at her for making out with her sister's boyfriend (whom she's still seeing), her grades are starting to slip and the notes from A are threatening to unleash secrets that could ruin her life. Aria is just as bad off. Her steamy affair with her teacher has been called off, but now she's into Hanna's ex-boyfriend Sean. While her relationship is heating up, her parent's relationship cools off and A is anxious to slip the secret. Emily is still questioning her sexuality and her swimming career. Hoping to get her old life back she takes a certain someone to the big Foxy dance, but he could be more danger than good. Last but not least, Hanna is trying to get her ex back, but she has a little competition. Also, her dad comes back into the picture and with him comes his evil soon to be step-daughter. All this drama can't be good for a small town, but these four girls don't care. They'll do whatever it takes to keep their secrets safe.
This book was a thrilling follow-up to Pretty Little Liars. It answers many of the questions that the reader is asking at the end of the first book. We find out about Jenna and more about the lives of Aria, Hanna, Spencer, and Emily before Ali disappeared. This book is the perfect mix of murder, rivalry, romance, and mystery. Perfect for any girl who's ever wondered what those "it" girls have to hide! The series becomes even more enthralling because as soon as one question is answered another appears. Especially the question of who is A! Sara Shepard has definitely got me hooked on the series and eager for more.
Posted by Tasha at 1:03 PM

i had just finished Flawless today and i LOVED IT!!! my fav part was from the beginning of Foxy to the end. Aria goes with Sean and they almost do it in the car until Aria sees a note from A. Hanna leaves her fathers house (i know they are talking) to figure out who Sean went to Foxy with (got a text from A), and finds that it is Aria she gets mad. Spencer goes with Andrew Campbell who she doesn't even like, but wants to go with someone. finally, emily goes with Toby, but Spencer, Hanna and Aria figure out that Toby is A, and try to save Emily. the next morning the police find Toby's dead body by the side of Emilys house. in the end, they realize that TOby cant be A. I CANT WAIT TO READ PERFECT!