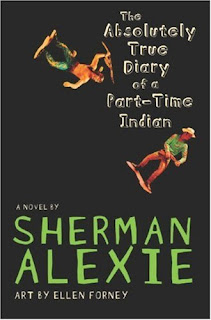 Arnold Spirit, better known as Junior, was born with water on his brain. This caused a disorder that made his head disproportional to his body, and made his whole brain very fragile. Having such a big head caused Junior much hassle on his reservation. When he’s 14 Junior realizes that people can’t hate him much more and decides to transfer to the all white school, Reardan. Here he feels like he will excel not only academically, but socially as well. Junior is pleasantly surprised when he is socially accepted and is doing well in school. He is even able to snag the amazingly beautiful Penelope as a pseudo girlfriend. Junior also makes the varsity basketball team as a freshman. Life is looking up for Junior. There seems to be only two things that bother him. One is his sister ran off and got married to a man she hardly knew, and is now living in Montana. Second is that his former best friend Rowdy won't even talk to him. All starts to go down hill when Junior's grandmother is killed by a drunk driver. Junior sets himself into a depression and swears to himself that he will never drink. When he finally gets over his grandmother's death he is burdened with two more deaths within the coming months and it seems to be all too much for him and his family. All of these deaths could have been prevented had there been no alcohol. These events set the idea of not drinking in Junior's mind forever. Although it is tough Junior recovers with the help of his new friends and his drawings in his diary.

I thought this book was O.K. Not fabulous, not bad, just O.K. Yes, the story was good, but I'm not sure I would have selected it to win an award (It won 2007's National Book Award for Young Adults). The story was original and I love how authentic Junior's voice was. I also loved the drawings, they were my favorite part of the whole story. I did think though that the message of how much harm drinking can do was great. People need to be constantly reminded that drinking doesn't solve problems it just creates them. One thing I didn't like was the story wasn't very exciting. There was no suspense and no questions were buzzing through my brain as I was reading it. I also didn't really like how the author made Junior feel sorry for himself just because he was an Indian and he had a medical condition. I think I would have had more respect for the character, and the book for that matter, if Junior wasn't constantly pitying himself. As I think the book was geared more towards teen boys than girls, I think boys may get a lot more out of the book than I did.
Posted by Tasha at 4:46 PM

I've been wanting to read this! It's been on my TBR list for a while. Thanks for the review. :)

thanks for the review. i've been wanting to read this, but just haven't gotten my hands on a copy. yours is actually the first review of it i've read!

I actually thought this book was pretty good. It was outside of my normal genres and I wasn't expecting it to be as good as it was!
-Liv (livsbookreviews.blogspot.com)