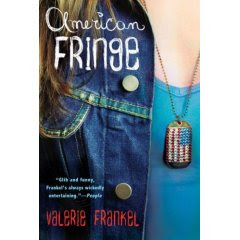 Adora Bennet has just landed a dream job. She is the new teen advice columnist for the New York Moon newspaper. She's super excited and along with this new opportunity comes a new friendship. Well sort of. Her sworn enemy Sondra has decided that they should be best frenimies now that Adora is "famous," Adora reluctantly agrees. While she is off making new friends her old friends, Eli and Liza, are not getting along at all. All is good with the Ask Adora column until she responds to a question about stay-at-home moms. Adora doesn't agree with the idea of a non-working mother and makes her opinion blatantly obvious. She offends many mothers, especially her boyfriend’s. Adora is sent into a frenzy of fame as many people become aware of her column. She appears on talk shows and the paparazzi are after her. Then the press finds out that the person who wrote the question is none other than the son of New York’s favorite presidential candidate, and Adora is again in a whirlwind of fame. Alas, her fame is short-lived because when grilled about her column on a talk show she doesn’t give a good response. This sends Adora into a downward spiral. Sondra doesn’t want to be her friend anymore, Liza and Eli aren’t talking to her anymore either, her dad tells her that her column is shallow, her boyfriend isn’t talking to her because his mother and all the stay-at-home mom’s of the nation hate her guts. What is a girl to do? Will Adora figure it out and turn around and write a stronger column?

This book was O.K. There was nothing terribly exciting about it and it was very predictable. I didn’t feel like I could connect with Adora and felt like she was a little flat. I know this is the third book in the series and in the fall a fourth one will follow. From reading American Fringe I don’t think it is necessary to read the preceding books in the series. Frankly, I don’t think I will read the first two books and am not anticipating the fourth.
Posted by Tasha at 9:00 AM

Im reading it and it is actually a satisfying book so far. It has some humor in it which is awesome. It is a bit predictable but it makes up for it most of the time.