The Fortunes of Indigo Skye by Deb Caletti 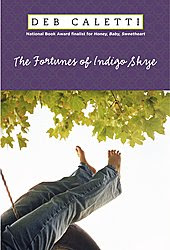 Indigo Skye is pretty pleased with her life. She has an amazing boyfriend, she loves being a waitress at the homey neighborhood restaurant Carrera’s, and while her family may not be well off they sure are filled with love. While some situations may not be ideal, Indigo knows she will always be supported by those she loves. Whether it is her direct family or her family over at Carrera’s (also known as the Irregulars) she knows she always has someone to turn to. All is good until a new man starts coming into Carrera’s. Indigo finds him very strange because he only orders coffee and just stares out the window. One day Indigo finds a pack of cigarettes in his pocket and tells him off, as she cannot stand a smoker. She thinks she’s scared him off until she gets a phone call from her boss telling her the mysterious man left her an envelope. Indigo is puzzled as to what lays inside, but is sure that it will be disappointing. The contents are anything but disappointing, actually they are stupendously unbelievable. Enclosed is a check for two and a half million dollars. Indigo is thrilled, but doesn’t know much about having money. She is constantly warned that money changes people, but she doesn’t think it could ever happen to her.

This was a completely brilliant and amazing book. I fell in love with it from the very first sentence. Not only was the storyline amazing, but all the characters, not just Indigo, had great personalities. Even the characters that you only met once or twice felt so real and I could automatically tell whether I liked them or not. Indigo was definitely my favorite character though. She was extremely sarcastic and witty. There were many, many times that I found myself laughing out loud at comments that Indigo would make or even her actions. What was also so wonderful about the story was its originality. It wasn’t your generic rags-to-riches everyone’s rich and happy in the end story. It was so much more. While Indigo did receive lots of money she learned more how to deal with it and become a better person. I felt that Indigo really underwent a change from the beginning of the book to the end, which was really neat. Deb Caletti’s writing was fresh and amazing. Having never read anything of hers before, but having heard good things, I expected a good read, maybe even a great read. Instead I got a stupendous, heartwarming, and hard to forget novel. I will definitely be reading many more of her books. I would highly recommend this book to everyone as it truly was unforgettable. Also I definitely think that Sarah Dessen fans will love Indigo’s story as well.

I've been wanting to read one of Deb Caletti's books for so long now, but I just never have gotten around to it! Eek! Great review!

Are the books by this author in a series or are they all separate books?

I've been told they were a series by one friend and that they weren't by another I'm confused and I don't want to read any unless I know!

Great blog! I love it!

All Deb Caletti's books are stand alone titles. This is the only one I've read, but it was wonderful!!

I've heard great things about Deb Caletti's books but haven't read any yet. This sounds like a wonderful one though. Thanks for the review!

Sounds like an interesting novel. I hadn't heard of the author until now, but she sounds cool. Great review.

i love deb caletti and i think her writing is very similar to that of sarah dessen. i really cannot wait to get my hands on this book :D

I read The Nature of Jade and absolutely loved it, but I didn't really like Deb Caletti's writing. So I'm not really sure if I'll be able to like this one, but I'll try it out. Great review.

Where do you get your book challeges from?

I've heard so many good things about Deb Caletti and I've never read one of her books. Which one do you recommend someone start with?

Deb's novels are fantastic. The Nature of Jade is my favorite.

I haven't read this one yet, but I recently enjoyed Honey, Baby, Sweetheart. I also plan to read The Nature of Jade.