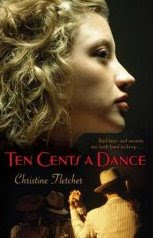 It's 1941, fifteen year old Ruby and her sister and mother live in 's meat packing district. Ruby has had to drop out of school in order to go and pickle hog's feet after her mother has to quit her job because of illness. When the local bad boy, Paulie Suezle, tells Ruby he knows a place where she can make $50 a week, she jumps at the opportunity, even if she knows her mother won't approve. The idea of the job gets even better when Ruby learns she will be working at the . Even though she is naive at first she soon learns that she has become a taxi-dancer. Men pay a dime for a chance to dance with a pretty girl and the illusion that these girls are interested in them. Not minding the job too much, especially because she loves to dance, Ruby soon finds herself making quite a bit of money, but also getting into an equal amount of trouble. With the aid of her only friend at Starlight, Peggy, Ruby learns the ropes of becoming a taxi-dancer. Will lying to her mother about her job be worth it in the end? Will she get a happily ever after love story?

What I was expecting was a good book. Historical fiction is right up my alley and I'm not too familiar with this particular time period, except for the whole war, but that's not too prominent in this particular book. What I got was a great novel filled with a strong heroine and a fascinating plot. It's been a long time since I read a book where I was immediately drawn to the strength of a character. Ruby was strong willed and determined to help her family what ever it took. At some times I felt she was a little stubborn, but still came to respect her. I also thought that the spectator characters were really developed. I especially enjoyed Yvonne, who was Ruby's biggest instigator at Starlight. She was so funny and she reminded me a lot of my younger sister, always stirring the pot! I also loved how Christine Fletcher wrote about a time that isn't as well known. Yes we all probably know all about World War 2, but do we really know what was happening to the normal people in ? Another great thing was the book was really easy to get into. The author had me absorbed into Ruby's story as soon as Ruby set foot into her first dance. Overall I was very impressed with Christine Fletcher's second novel and will definitely go back and read her other book, Tallulah Falls, and will eagerly anticipate her future works.

I've been hearing tons of great things about this book! It looks amazingly good. I'm definitely picking up a copy soon. Great review!

I really, really want to read this book!

I love this book! I also liked that it was focusing on the civilians and everyday life during WWII.

What a wonderful review. Now I have another book to add to my list. :)