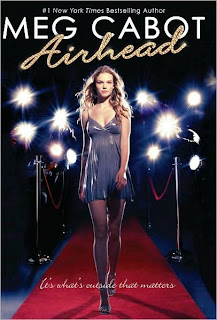 Emerson Watts, or Em as she prefers, is a total tomboy. She loves hanging out with her best friend, and secret crush, Christopher playing video games and is a total geek in school. She especially can’t stand girly girls - she considers them the Walking Dead. The worst thing is that her sister is turning into a Walking Dead member faster than Em can complete a level of the her beloved Journeyquest game. When the day of the grand opening of the new SoHo Stark Megastore arrives Em’s sister couldn’t be more ecstatic. The only thing that’s raining on her parade is the fact that Em has to tag along to “baby-sit” her. Em’s not particularly pleased either, but at least Christopher will be there to endure the pain too. What Em doesn’t know that disaster will strike during their trip to Stark Megastore. In a twisted turn of events and one uncanny accident, Em is really not herself anymore. Literally!

This was absolutely the best Meg Cabot book I have ever read. She has really outdone herself with this book. I really don’t think this book could have gotten much better. What I especially loved was that you were thrust into the story from the very first page, yes you were hooked, but the drama started right away. There weren’t many pages about who each character was and what they were doing, it was just the story. I also found that this book flew by. It literally pulled you into Em’s world and didn’t release its grasp on you until the very last page. When the book was done I found myself stunned that it was already over as I felt like I had just started it. The book included Meg Cabot’s usual funny and sarcastic writing style, which I love, and the characters were completely great. Each character really seemed to come to life in their own way and the reader was given the opportunity to form their own opinion of each character. The twists in this book were completely unthinkable. I was so shocked at some things that it made the book even better. I absolutely recommend this book to all Meg and non Meg fans alike, as I am sure you will love it. I cannot wait until the next book in this trilogy, Being Nikki, which will be released next May.

Amazing Review!! I can't wait to read this book. =D

i'm so psyched for Being Nicky, and you know, meg's books always seem to get released early :D *drools happily*

AHH! I need to buy this book! I keep reading great reviews. I need to get my butt to Borders ASAP!

Don't mean to be picky about spelling, but... It's Being Nikki. Great review. Meg's books never disappoint, do they?

to all of you people out there that are interested in reading "Airhead" i would really recommend that you do! it is a great book with a climax you would never expect!

Airhead is like one of the best bookz I've ever read! I can't wait 4 May 2 come! Everyone should read this book! Itz totally awesome! =)