How to Build a House by Dana Reinhart 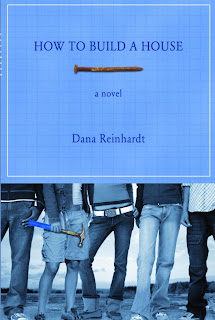 Harper’s life is falling apart. Her father and step-mother, whom she considers a mother, are getting a divorce and her step-sister/best friend Tess won’t talk to her. Then there’s Gabriel. He’s been Harper’s best friend since they were twelve, but now he just uses her as his girl when he can’t get anyone else. Harper finally realizes that she needs to escape. When she finds out about Homes for the Heart Summer Program for Teens, she knows she’s found her escape route. At the beginning of the summer she heads off to Bailey, Tennessee where there was a major tornado that devastated almost the entire city. Here she will join a group of teens and help build a family a house. Little does she know that she will not only rebuild one family’s life, but may actually start rebuilding her own. She immediately starts making friends with the other volunteers and loves the aspect of helping other people. Then there’s Teddy, the son of the family for whom the house is being built. Teddy chooses Harper. He shows her how to trust and love and turns her summer into an unforgettable moment.

First, I have to say this surpassed and exceeded every expectation I had of this book. Not only was it an amazing and heart felt love story, but also an extremely real story of finding oneself. At the beginning of the story Harper is lost, struggling like many of today’s teens with the divorce of her parents. She grows so much as a person that it inspires the reader to really look at their life and see if they can make themselves a better person. Harper’s character is beautifully created and hard to forget. She is very honest and so real that she’s hard not to love. And then there is Teddy. Whew! He sounds like the ultimate boyfriend. There’s everything to love about him and it drives me crazy that he’s not real. I mean who wouldn’t want a guy who wants to make your life better and really wants to know everything about you. Besides the characters Dana Reinhart’s writing style was one of a kind. I really enjoyed how the story kept flipping from Harper’s current life in Tennessee and then what her home life was like. Overall this was a stunning novel that I highly recommend. I completely loved it and will definitely read it over and over again!

This sounds really good. I'll add it to my to-read list. :-)

This sounds good. [: I'll have to get it when it comes out!

hmm, this sounds very interesting, i will have to add it to my reading pile! great review!

This book looks so great, I have it coming in the mail right now so I'm really excited to read it. Great review!

Sounds excellent - I'll have to pick this one up.

I've heard wonderful things about this book from my co-workers at the bookstore. I look forward to reading it, but every time I go to grab the galley, someone else is one step ahead of me. Sigh, maybe soon.

This book sounds great! It's definitely going in my TBR pile! That was an awesome review

this was a great book!!
its one i'll never forget