This weeks fabulous author is Kimberly Pauley. She is a debut novelist, who's novel Sucks to be Me came out on Tuesday. It is a hillarious book, focused on a girl named Mina's decision on whether or not to become a vampire. To read my review, click here.

Not only is she an author, but she is also the founder of the YABC website, which is totally awesome. She is also a new mother...while kind of new. Her cute as a button son is somewhere around the age of six months and he looks to be the cutest thing ever!!

Also right now she is hosting an amazing book launch party at her blog. Head on over to read some great interviews with other authors and win some really neat prizes.

I hope you enjoy the interview!

1. What made you want to tackle a vampire book? What made you take a comical spin on the subject, instead of one filled with romance?

I can’t say that I actually “wanted” to write a vampire book, honestly. ☺ It just worked out that I had an idea and once I started writing bits of it down, Mina took over. She’s got a really strong voice in my head.

There’s definitely some romance in the book, but you’re right, it is primarily a comedic novel. That was one of my goals – I wanted to do something funny since most vampire novels take themselves so seriously. And I wanted a book that even non-vampire lovers would like to read.

2. What sparked the creation of your book?
I was awake one night way past my bedtime and started thinking about vampire books and how they all took themselves so seriously. I was thinking it would be a lot of fun to turn the normal plot on its head (this was back in early 2005, when I wrote the book). The first sentence came to me immediately and things just kind of flowed from there. It was the first time I’d ever tried writing in first person, present tense too.

3. What made you choose a young adult audience?
As a YA book reviewer, most of what I read is for teens and tweens. It’s some of my favorite stuff to read – I hardly ever read an “adult” book anymore. So it was kind of natural for me to go in that direction. I also studied adolescent literature a lot in college.

4. Do you see a lot of yourself in Mina or in any of the other characters?
Definitely the snarkiness and humor. Not that I’m all that snarky in person…at least, not out loud.

5. What’s one of the hardest parts of being a writer? The best?

I’m only kind of kidding there. Writing is, in itself, both the hardest and best thing about being a writer. I think most writers are people that can’t *not* write. There’s all this stuff going on in our heads and we’ve got to get it out. But, sometimes it is hard to sit yourself down (BIC or “butt in chair”) and do the work…because it *is* work. No matter how fun it can be, writing is work and you should treat it like any job. I know it was hard for my husband to understand what the heck I was doing at first since part of writing looks like sitting down and staring off into space…so sometimes it often seems like I’m *not* doing anything (well, okay, sometimes I’m actually not really doing anything).

Hmmm…this is kind of a convoluted answer, huh? Let’s just say that the hard 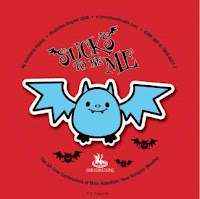 I actually have two, depending on my mood: a coffee shop that’s not too loud, with comfortable chairs and ice cream-y coffee drinks OR my front porch on a nice Spring or Fall day with a light breeze and a cold glass of lemonade.

7. If your book was to become a movie, whom would you cast as the characters?

Okay, I promise that I’m not trying at all to copy Twilight here, but Kristen Stewart I could actually see playing Mina. However, I’m thinking of her how she was in the movie Zathura. And, well, I’m also (sadly) not that up on the current crop of teen actresses…so it is kind of hard for me to pick any. Hmmm, I need to go research this some. If anyone has any suggestions, let me know! I’ll probably have to Google them. ☺

Wait…I just Googled “teen actors” and came across a website with a bunch of pictures. Hmmm, maybe Adam Brody for George and Alex Pettyfer or Cory Sevier for Nathan? And maybe Anna Popplewell for Serena? Somebody like Ben Barnes or Ben Jelen for Aubrey…hahaha, can you tell I just made it through the A-C section? And did you know there’s actually some kid actor out there named Boo Boo? I just saw another Mina possibility too – Dani Thorne.

8. Why did you create Young Adult (& Kids) Book Central?

My big overreaching goal with YABC has always been to promote reading and literacy and my secondary goal was to provide a place for authors and publishers (no matter how big or small) to have a forum to get information about their works in front of readers. I’ve given away thousands of books over the years. It’s a real labor of love…the site finally started breaking even in the last year or two (and I’ve been doing it now for 10 years! Wow!).

9. Do you mostly read adult books or young adult, or a healthy mix of both? What are the last three books you read?

Mostly YA, but I’ll throw in an adult book every now and then. I mostly do the YA because I’ve barely got time to read all the review books I get to begin with. Not that I’m complaining! It’s just that I receive hundreds of books a year. I can’t possibly get through them all, especially when writing and taking care of our new baby.

And the last three I read…hmmmm…I haven’t done a lot of reading lately because of the baby. So the last three were…um…Poison by Chris Wooding, Beastly by Alex Flinn, and In Defense of Food by Michael Pollan. All of which were great, in completely different ways.

10. What’s one quirky thing that you care to share?

I make my own soap. It’s kind of fun. The real stuff too – like the frontier people used to do with lye and everything…except I use oils and not animal fats. The whole thought of a lard-based soap is just kind of gross. But almond oil and coconut oil? Yummy. 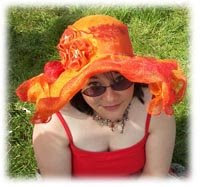 11. What can we expect from you in the future? Are you going to continue Mina’s story?
I’m working on a sequel now called “It Still Sucks to Be Me” which the publisher will hopefully pick up (depending on how well the first book does). And I’ve got a number of other projects that I’ll be finishing up once that is done, so be on the lookout!

12. Are there any questions you wish I had asked?

Nobody ever asks me about my silly orange hat that I have on in the picture on my website. ☺ I love that hat! We briefly lived in Louisville and it was my Kentucky Derby hat. It’s a shame that people don’t get to wear hats more often.
Posted by Tasha at 12:00 PM

Wow! This is one busy talented person! Great interview.

Just wanted to stop by and wish you a wonderful year at school. I bet you can sleep through calculus, following your summer camp experience.

Tasha -- I love your blog! (Thanks for entering, or I may never have found you!!) Anyway... you won How to Ditch Your Fairy in my Bloomsbury giveaway. Congrats!! If you could send me your snail mail address to mmfbooks at gmail dot com, I'll pop it in the mail for you.