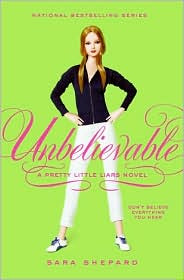 Spencer, Hanna, Aria, and Emily are back, some in better state than others, and ready to bring down A. When we last left the pristine Rosewood Hanna had just discovered who A was, but she knew too much and A made sure she couldn't say anything by "accidentally" hitting her with a car. Now as Hanna fights for her life, the other three girls have to clean up the mess that A has made.

Spencer finally remembers what happened the night of Ali's death and what she remembers isn't good. Could she really have killed Ali? Not only does she have to deal with the thought that she could have really killed her best friend but she's got to reason with the guilt of stealing her sister's AP Economics paper which got Spencer nominated for an award her sister should have won. With the feeling that A is constantly breathing down her back will Spencer be able to keep her cool composure or will she finally pop?

After A let it leak that Emily likes girls, Emily's been living on the edge of sanity. Her parents don't know what to do with her so they send her off to her hyper conservative relatives in Middle of Nowhere Iowa. When she arrives Emily knows she won't last long, then she meets Trista, an interesting girl who seems to understand Emily and doesn't mind talking to her. Will Emily last, or will she flee back to Rosewood and hope that she is accepted by those who love her most?

Aria's been kicked out of her mother's house after her mom found out Aria had been keeping the secret of her father's affair a secret for the past three years. Once again we have A to thank for unveiling this bit of information. With nowhere else to go Aria moves in with her father and horrifyingly peppy girlfriend Meredith. All Aria wants is for her life to go back to normal. When she starts an art class over at the neighborhood college her partner is none other than Jenna Cavanaugh, the girl who was the terrible victim of a nasty prank that Aria was a part of. Can Aria ever escape her past or will it keep catching up with her?

Then there's Hanna who really is hanging on for dear life. She can’t remember anything from the night of the accident, especially the identity of A. The rest of the group doesn’t want to pressure her too much, but they really want to know who A is. If this isn’t enough Hanna has to deal with her feelings for Lucas. She remembers hanging out with him a couple of times, but that’s it. It seems though that a lot more happened. Will Hanna be able to get her memory back and solve they mystery of who A really is?


This has always been a favorite series of mine. I mean who can resist the scandalous secrets of others, especially of those who live in Rosewood? Unbelievable completely blew all three of the books out of the water. It could almost be a stand alone book if all the information we learn in the preceding books wasn’t crucial to the plot.

The plot itself was great. Suspense has a totally different meaning to me now! At no point did I find myself knowing what would come next. I eagerly turned the pages hoping to devour more secrets and uncover more answers. The author did a great job hanging the identity of A over our heads until the final chapters of the book. And just as you thought you knew who killed Ali, wham the author threw another curveball at you. Before I had even started the book I had known that A would be uncovered in this book and was truly wondering how the story would continue afterwards as there will be a total of eight books. I found that as some answers were told more questions surfaced. Again the author left us with too many questions left unanswered. Now I simply cannot wait for the fifth book. In the meantime though I urge you to pick up this book as it is simply impossible to put it down.
Posted by Tasha at 10:58 PM

I really enjoyed this installment to the series, however while I am excited for more books, I thought that it was such a stupid way to continue the series the way she did. Just wasn't very creative. I'll still read the next four books cuz I love them, but it just seems like a cop-out.