The Lightning Thief by Rick Riordan 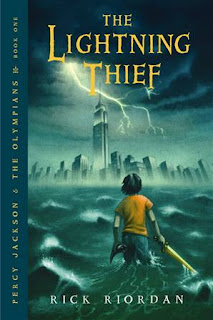 Percy Jackson has been deemed a trouble maker. He goes from one boarding school to the next, barely making it a year in each one. Now he’s about to be kicked out of school again. Not only is staying at one school hard, but Percy suffers from dyslexia and ADHD and the only thing that seems to hold his interest is Greek mythology. After school lets out for summer his mom takes him to their favorite beach for a vacation and breather from the “real” world. On their first night there is a terrible storm and his mom realizes they must get home immediately. On their way home though they run into a Minotaur, yes a real live monster! With not enough time to tell Percy the whole story his mom tells him to just run over the hill and he will be safe. Not wanting to let his mom go he kills the Minotaur, but it is too late as his mom has already disappeared. Over the hill Percy finds Camp Half-Blood. Camp Half-Blood is for kids who are half human and half Greek god! Percy is amazed to find that he is a descendant of a god, but which one nobody is sure. After only a couple of weeks Percy, his newfound friend Annabeth, and his best friend and pseudo guardian Grover set out on a quest to find Zeus’ missing lightning bolt and maybe a few other things, good and bad, along the way!

This was an amazing, scintillating, glorious book. Nothing could have torn this book away from me, except maybe a Minotaur!! The story was original and captivating and just all around great. Percy’s character was so likeable that I immediately wanted him to be my best friend, even though he’s only twelve. As I am a huge fan of Greek mythology this was great, but the story in itself was just so fantastic that no matter who you are you will enjoy it. The story that Rick Riordan weaved was so full of detail, yet it moved extremely quickly. There were so many twists and turns that I was guessing until the last page, and even then you’re still hanging on the edge. This is the first book in the Percy Jackson and the Olympians Series, and currently there are three others. While this is classified as a middle-grade book I think readers of any age will enjoy it. The level of adventure and suspense will intrigue anyone’s mind! I definitely cannot wait to read the next book, The Sea of Monsters.

i haven't read any of the percy jackson books, but i keep hearing they're great and i go love mythuology

This is my absolute all time favorite book! Love it!

this is a great book! it is my favorite!

I'm about to start #4, The Battle of the Labyrinth, and I'm disappointed to hear that #5 will be the last Percy Jackson, because I love this series as well.

I really wanted to read this series, and I saw this one at Books a Million the other day, and was like "wow, those look really good"

I really realy want to read them

I tagged you for an author meme, if you're interested.

i tagged you for a meme too :D

I loved the Percy Jackson series; I just read Riordan's new novel The Red Pyramid (Book 1 of his new series, The Kane Chronicles) and it was, somehow, even better than Percy Jackson! I've got a review up on my blog, if you're interested - and I've got a "what's your favorite fantasy series" poll going on right now too.

P.S. I'm a new follower - stumbled across your site via twitter.