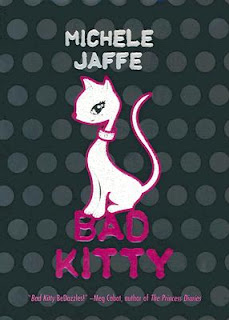 Jas is a 6 foot tall seventeen year old who loves a good mystery. The thing is, her father can't stand her gallivanting around trying to solve these mysteries. After a summer spent being a medical assistant at her uncle's practice she is ready to take her annual summer vacation with her family. Her first day in Las Vegas, at the glamorous Venetian hotel, seems to be perfect. The sun is shining and Jas is having a wonderful time eyeing the hot guy standing by the snack bar. Then her evil cousin Alyson and her henchman Veronique have to come and disrupt the peace. Not only does Jas have to endure this, but then a hairy orange furball of a cat jumps on to her and claws into her skin. OWWW! She runs trying to get the cat off, but only stops when she knocks over a 5-tier wedding cake and sends the bride into a pool. After being taken to a "jail" cell, she is released by the chief of security himself, Mr. Curtis. He seemed to be even thanking her for ruining the wedding! After the accident she realizes that the reason she was let go was because the cat that had caused so much trouble belonged to the super famous Fiona Bristol's son Fred. There even seems to be a mystery surrounding Fiona's life, but Jas is trying to be a model daughter and tries as hard as possible not to get involved. Her attempt fails when she is surprised by a visit from her three best friends, Roxy, Polly, and Tom, who convince her that she must and try to solve whatever mystery there might be. With the help of her friends Jas starts to uncover lots of little clues, and one thing leads to another. Before she knows it shes wrapped up with the cute guy at the snack shop, and has fallen into a case that seems to be way over her head. Will Jas be able to solve the mystery? Will she make her father find the good in mysteries?


This book was really good. At first I was a little leery, but then I just loved it. It's almost like a modern Nancy Drew, but a lot more sassy. Jas makes a great main character. She is quirky, funny, and up for anything. With her three sidekick friends she seems unstoppable. I loved how each character had one thing that was crazy about them. For example, Polly loves BeDazzlers, Roxy is obsessed with Aliens, and Tom is head over heels in love with Polly. This really added to the quality of the book. One thing that I didn't like about the book was the footnotes. It seemed like there was a completely different story going on within the footnotes, which confused me a lot. Excluding the footnotes though the book was great. There were many turns that kept you guessing until the last chapter and many surprises that made me laugh. All in all a great mystery that I recommend to everyone.
Posted by Tasha at 8:52 PM

I've been dying to read this. ^^ Great review. (And owwww to the cat jumping on her.)

I've heard of this book but I've never seen a review until now. I'm glad I have because now I actually have some serious opinion on it.