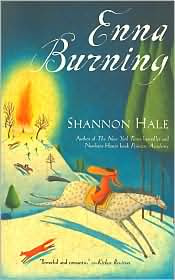 A couple years after Isi's marriage to Prince Geric, Enna returns to the forest after being in the city of Bayern for so long. Her original return was to tend to her sick mother, but after her mother dies, Enna can't seem to leave her brother Leifer alone in the forest. Little does she know that Leifer has truly changed. He seems to know the language of fire, just like Isi knows the language of the wind. The fire seems to overtake Leifer and he goes as far as threatning to kill Isi and burning Enna's ankles. Bayern soon goes to war and all men, including the forest folk, are asked to join in the fight. Enna is also asked to go, not to fight, but to be Isi's maiden. At the first major battle, Leifer uses his fire and burns, and kills, many enemy soldiers. In this same battle the king of Bayern is killed as well as Leifer. Geric mourns the loss of his father, as does Isi, and Enna mourns the loss of her brother. Except Enna mourns in a different way. When saying her final goodbyes to Leifer she finds a piece of vellum that teaches the fire language. Curiosity gets the better of her and she begins to read the cryptic story. Soon the fire seems to take her over, and she seems to have changed, just like Liefer. Enna soon realizes that she must use her newly discovered power to help Bayern win the war. She gets a little ahead of her self and finds herself captured by the enemy. Just as she has finally given up hope that no one will come to her aid, she starts to discover she may have feelings for her capturer. In the back of her mind she knows he is the enemy, but all she wants is someone to love her. All changes when Isi helps her escape. Enna learns the truth of why her captor was being so nice, and she knows she must get to Bayern immediately if she still wants to succeed in her goal of helping them win the war. Will Enna's power get the better of her, or will she learn to control it?

Usually I am not so keen on follow up books, but I was definitely wrong with this book. This is a great companion to one of my favorite books, The Goose Girl. Enna Burning is told through the point of view of Enna, which I loved. I thought it was great that we got to hear another characters to voice in the follow up novel instead of the same character from the first book. Shannon Hale did a phenomenal job creating the character of Enna. She is a strong and funny character that is instantly likable. I felt myself pitying her at times, and laughing with her at others. As for the story line is was once again fabulous. There is adventure, war, and romance, which is enough for me! All in all this was one of the better books I've ever read, and for me it almost lives up to The Goose Girl, but hey nothing really can top that so I'd say it's pretty good.
This is my third book for the Royalty Rules Challenge!!
Posted by Tasha at 11:31 AM

I missed your review of this! I love this book. The audio version is nice too.