Nick of Time by Ted Bell 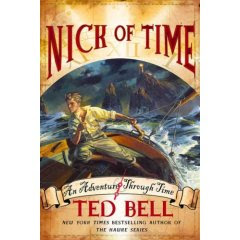 Twelve year old Nick McIver is always up for an adventure. Especially if it has to do with sailing around Greybeard Island, which he calls home, in his self made boat. Nick loves his life on the island. He gets to live in a lighthouse (which has been maintained by the McIver's for generations), there is lots to do, and everyone is so friendly. One night as he is helping his mother find her glasses he comes across a secret drawer in his father's desk. Inside the drawer Nick finds a notebook filled with notes on his father's "birdwatching", which are actually his reports from spying on Nazi activity. When his father finds out that Nick came across the book he is not angry as Nick expects. In fact he welcomes Nick into his "birdwatching" circle and asks him to keep an eye out for any suspicious behavior. Nick takes his mission very seriously and doesn't delay in searching out clues. While off galivanting around the island with his sister Kate, Nick comes across a washed up chest. The chest looks like it's from a very long time ago, yet it looks brand new. Nick wonders how this could be. The chest is very heavy and impossible to open, but Nick and Kate manage to hide it in a cave until they are able to come back for it with help. On the way back home they encounter a terrible storm and run to their old friend Gunner's Inn for shelter. There they meet two mysterious pirates who scare them senseless. When the one pirate, Billy Blood, hears Nick, Kate and Gunner discussing the chest he becomes very interested in it. Could Billy Blood possibly know the contents of the chest? After realizing Blood's suspicious fascination with the chest, Nick is determined to find out what lies in it, and keep it away from Blood. In order to protect the chest Nick decides that he must take it to Hawke castle, which is supposedley deserted, but when he reaches his destination Nick finds that it is far from deserted! There he finds that Lord Hawke and his trusty sidekick Hobbes are still living in the castle and know quite a lot about the contents of the chest. Whent the chest is finally opened, Nick finds Da Vinci's time machine! With the aid of his friends and the time machine Nick goes back in time to help an ancestor and battle Billy Blood, while Kate and Hobbes set out on an adventure that involves a German U-Boat. Will Nick be able to set things right?

While the plot was interesting I can't say I loved the book. For me there wasn't that extra something that completely pulled me into the book. While reading I thought it was excellent, but once I put it down I found it very hard to pick back up again. However there were many good highlights to the book. The story was a combination of spies, pirates, mystery, adventure and war. Some of the scenes in the book reminded me a lot of the Pirates of the Carribean movies, which I really enjoyed. One other thing I enjoyed was the author's ability to make you vividly picture the scene in your mind. Every scence played like a movie in my head making it easy to relate to the characters. I would recommend "Nick of Time" to middle school boys as it deals with topics that they just seem to love!
*Also reviewed for FlamingNet
P.S. The Story Siren is giving away a copy of City of Ashes. Visit her blog by March 26, for more info!!
Posted by Tasha at 8:36 PM

Hello Tasha,
Did you get your prize I sent you, from the BookMarks contest? Please let me know when it arrives. readernutcase@msn.com
Thanks