The Elite by Jennifer Banash 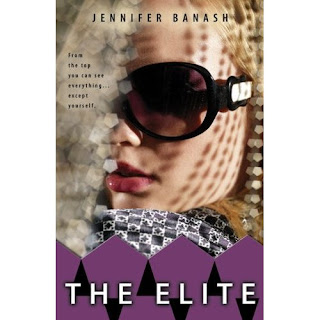 As soon as Casey McCloy steps into the luxurious Bramford apartment building she knows that she has entered another world. Everything seems so much more elegant and sophisticated then even the nice places in her hometown of Normal, Illinois. Casey has moved to Upper-East Side Manhattan to stay with her grandmother while her feministic mother travels to England to do research for her up and coming book. Before Casey even steps foot in her grandmother's apartment she is greeted by Madison MacAllister, the ultimate It Girl, and her possey. Even though the girls seem intimidating, Casey thinks that maybe, possibly they could be her friends. They even invite her to the park with them after she has settled in. When Casey finally makes it to the park she is thoroughly introduced to Madison's sidekicks, Sophie and Phoebe, who seem to be a lot nicer than Madison. Casey is also introduced to Drew, who just happens to have something going on with the Queen bee herself, but definitely has eyes for Casey! During the last few weeks of summer vacation Casey finds herself hanging out with Madison, Phoebe, and Sofie quite a bit. They even give her some fashion advice for her first day of school outfit. Casey's stoked that she has found some friends, but when Casey starts talking with Drew jealousy overcomes Madison and things aren't as bright for Casey anymore. Madison is determined to get Drew back, and she always gets what she wants. Will Casey's sweet demeanor trump Madison's nasty attitutude?
This book was awesome. I couldn't put it down. Originally I was a little skeptical because the book sounded a lot like the Gossip Girl books which I don't really care for, but I made the completely wrong assumption. While there is drama in this book it doesn't overpower the story, it actually makes the book even more devourable. The characters are extremely real and in most cases likeable. Yes, the girls were rich, but money wasn't the main focal point of the story. Actually, I liked how Casey was able to lead a very interesting life without all the glitz and glamor that money provides. I also liked how two of the supporting characters, Sophie and Phoebe, got their chance to shine too. I haven't read many books where this happens and I really liked how the reader got to take a little break from the main character(s) to see what else was going on in the story. Another great thing about this book is the humor. I found myself laughing out loud a lot and just smiling at what Sophie would say, or how Casey would act. This was a great first novel from Jennifer Banash and I desperately wish that the sequel, In Too Deep, was already on my bookshelf but I guess I'll have to wait until October...! In the meantime, The Elite comes out on June 3 -- I highly suggest that you all pre-order it as it was such a good book.
Posted by Tasha at 6:11 PM

I have this sitting on my shelf, waiting to be read. I guess I'll have to jump on it! ^^ Great review.

I can't wait to read this.

yeah, i think i'm supposed to be reviewing this soon....

wasn't this an awesome book! i think we felt the same way about it

I can't wait for this one to come out! You're so lucky =p

Sure let's exchange links. I'll put yours up right now!

Thanks so much for the great review! I'll definitely be sending you IN TOO DEEP if you're interested :)