Take Me There by Susane Colasanti 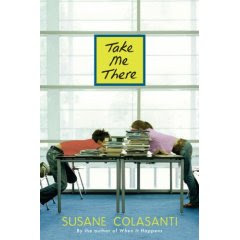 Rhianon has just been dumped by her boyfriend for no apparent reason. She is beyond devastated. She just doesn't understand why Steve would just break up with her. The worst part is she wants Steve back, but it seems he doesn't feel the same way about Rhianon.
Nicole is her own kind of person. No one's like her, but they all admire her. She has just dumped her boyfriend and only she knows why. Danny was the sweetest boy that Nicole had ever met, but then things started getting too serious for her and she just had to end it. Quickly moving on she soon has a new crush.

James is a computer geek who's Rhianon's best friend....but he so wishes it were more. His best friend just happens to be the same Danny that Nicole just dumped, and he knows that Danny still wants Nicole back.
Set during one hectic week of these three friend's lives, Take Me There is the ultimate teen novel. What starts as a horrible week, ends up turning into one heck of a roller coaster ride. Told from all three people's perspective we learn all of the dastardly deeds and heartbreaking moments each character experiences.
This was one of the cutest books I've ever read. Each part of the story was told three times, but by a different character which made the book really interesting. It also allowed the reader to learn secrets about the other characters and made previous events that had happened make sense. This was the first time I've ever read a book told like this, and I loved it. I also really enjoyed how all the characters seemed so real. Nicole is the best friend who will always help you up when your down, but will never accept your help, and Rhianon is the smart organized, super nice girl in all of your classes. As for James, I totally have a crush on him. He seems like the sweetest guy who any girl would die to have. There is nothing that I didn't like about this book, and I recommend it to anyone looking for a good, heartwarming read. I definitely look forward to ready more of Susane Colasanti's novels.
Posted by Tasha at 5:52 PM

I love her style! When it Happens was amazing so I HAVE to read this one.

Anyone who is into the bestfriend romance, and actual things that happen in teenage lives would love this book, i know i did(:
<3

im reading this book right now and im 18 and a senior in HS. i loveee this book because it uses words like we do and its just perfect..

'take me there' was an awesome book. i really want to read 'when it happens'. susane totally got what it's like to be a teenager and what we all go through. i just couldn't put this book down. i loved it.