Violet by Design by Melissa Walker 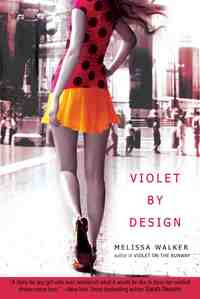 At the end of Violet on the Runway, Violet swears that she's quit the modeling industry. That is until she is offered the opportunity to walk the runway in Brazil. Violet has always wanted to travel and she sees this as her ticket. Deferring college for a semester Violet heads to Brazil while her best friends, Julie and Roger, head of to their respective colleges. While in Brazil Violet meets up with Veronica, and realizes that Veronica is one of the best friends that she has in the industry. When Violet's not catching up with Veronica, she's putting on a spectacular show and designers are all wanting her to walk for them. Then there's Paulo... An up-and-coming designer who is extremely hot, and whom Violet can't help but fall helplessly in love with. She almost feels that she could go all the way with Paulo, that is until she finds him in bed with another woman. Mortified she hops back on a plane to the States and wallows for two weeks, feasting on ice cream and cheeseburgers. Her brother finally convinces her to get her act together and she does. She flies up to New York and hangs out with Roger and his highly annoying girlfriend Chloe. After her outing Violet knows she's ready to go back into the modeling world, and calls up her agent, Angela. When she sees Angela, she wishes she had never called. Angela immediately starts picking Violet apart for putting on 5 pounds. Violet's ashamed of herself, but continues trying to get rid of that blasted ice cream weight. Her dream of traveling comes true again when she is whisked off to Spain. Here she is still pestered about her weight, but when she speaks up she gets into a lot of trouble. Will Violet ever be satisfied with her body? Is her modeling career over?

Wow! This book was just as good as the first one. For me that rarely happens. Violet was as strong as ever in this book and I loved how she stood up for what she believed in. Throughout the story Violet is pressured into losing weight even though she's already skinny. This deals with the whole models are too skinny issue that real world models are facing today. I thought that Melissa Walker did a fantastic job getting the message across that we all need to be comfortable with our bodies and that being skinny definitely has it's negative side. Once again I couldn't put the book down and was riveted by the story. I stayed up until all hours of the night to finish it and it was so worth it! One thing that frustrated me during the whole book is Violet and Roger's relationship. I believe that they are destined to be together. Why, o, why does he have to be with that Chloe girl? Why Melissa Walker did you have to leave us hanging with their whole relationship? So many questions left unanswered. Hopefully they will all be answered in the third book in the series Violet in Private, which comes out in August. I absolutely can't wait:)
Posted by Tasha at 5:48 PM

i can't wait to read this book!! great review!

I loved your review! I actually found it by 'Googling' because I was wondering about the book's main characters. Thanks!