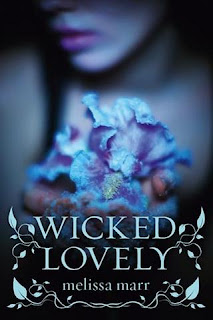 Aislinn has always been able to see faeries, but has never let on to it. This is one of the rules that her grandmother instated when Aislinn first mentioned the faeries. She always abides by this rule in fear that if the wrong faerie finds out, there will be grave punishments. Life is good for Aislinn until she begins to be stalked by two faeries, one of whom happens to be the Summer King Keenan. Keenan has been in search of a queen for centuries, but just can't seem to find the right girl. Yes, many girls have been swooned by his looks and attempted to be the prized Summer Queen, but they have all failed either becoming Summer girls, who are sultry faeries, or are filled with winter and become Winter Princesses. When Keenan meets Aislinn though he knows she is the one. Not only because of her ability to resist him, but that his mother, Beira the Winter Queen, is very afraid of her because of her abilities. As for Aislinn she wants nothing to do with the faerie world. She is content being a teenager. The only thing is she can't seem to figure out is her relationship with her best friend Seth. They've been friends for a long time, but she's not sure if she only likes him as a friend anymore. He is constantly flirting with her and seems to be sending out mixed messages. What is a girl to do? Putting her feelings on the back burner for a few days Aislinn enlists Seth's help to deal with the faeries. She wants them to leave her alone, but she seems to have an irking feeling that maybe it wouldn't be so bad to help them out. With the help of Seth Aislinn learns that she can be in control of the situation and starts to see if she can make the best out of the situation and make everyone happy.

This was an absolute gem to read. Everything about it was beyond amazing. Isn't the cover fantastic too? I must admit I have never been keen to read faerie books, but Wicked Lovely left me craving for more of the faerie world. To me the story was completely original and the writing was phenomenal. Melissa Marr slowly reeled me in from the first page and left me dangling throughout most of the book. It wasn't until the very end that everything came together. Also the names used in the book are so original and creative. Aislinn's character was great. I felt like I had a connection with her, not that we seem to be alike, but there was just something there. This was a great debut novel and I cannot wait to read more of Melissa's writing. Ink Exchange comes out at the end of April. I strongly recommend this book to everyone and anyone, whether you like faerie tales or not. This is truly a unique book that I think everyone will love.
Posted by Tasha at 9:26 PM

I really liked this book too. Have you read Ink Exchange yet? I haven't but I've heard good things about it.

I would really like to read this book. I happened to hear about it when I was at the harper teen website. They have a great podcast that you might want to check out.

Wicked Lovely is definitely a book I might end up buying!